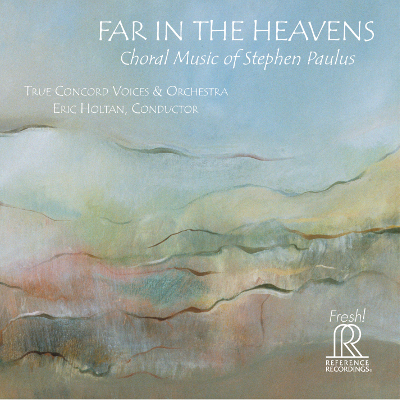 Stephen Paulus provided the musical world, and particularly the choral world, with music both provocative and pleasing through a combination of lyricism and a modern-Romantic tonal palette.

This new recording places at its center Paulus’ last large scale work, Far in the Heavens, a commission for the 10th anniversary of the 9/11 terrorist attacks. Like his other large scale oratorios, it covers the full range of his expressive and accessible style. Combining words from disparate cultures, centuries, and faith, the texts include prayers from St. Francis of Assisi, Mohammed, and the Navajo as well as poetry from Henry Vaughan, Percy Bysshe Shelly, and William Blake. Paulus mines each of these sources for the common human experience of grief, recovery, and spirituality to provide a balm of healing years removed from tragedy.

The words of each movement are almost exclusively in a homorhythmic texture allowing Paulus to carefully craft their setting. He follows the words’ natural poetic stress resulting in both reflective and emphatic recitations. Color and word stress become the primary focus of the texts’ meanings. For instance, the word “light” receives notable attention – a loud consonant chord in a major key – in both the first and second movements.

The most dramatic elements of the work appear in the opening chorus, “They are All Gone,” where Paulus’ use of orchestral colors is on full display. Throbbing timpani and brass fanfares announce that “they are all gone” while the lightness of harp and woodwinds evoke the “glows and glitters” of an air of glory of the high heavens. Likewise, the movement “Great Spirit” is marked by marked contrast between the opening invocation of the Great Spirit through animated outbursts of percussion, woodwinds, strings and the hushed sustained colors of the choir’s childlike incantations that follow. Here Paulus sounds Britten-esque as an arrhythmic recitation of words sounds over sustained tones in the orchestra.

The performance of True Concord Voices and Orchestra is excellent. Paulus’ trademark bright harmonies and cluster chords ring true with perfect choral intonation. The expressiveness of the music and texts come through effectively with clear articulation and distinct enunciation. The choral tone is generally crystalline with minimal vibrato which suits Paulus’ sound world, but at times fails to match the vibrancy, depth, and balance of the orchestra.

The remainder of the recording provides exposure to lesser known small form works of Paulus’ catalogue. The most intriguing of these is “Little Elegy” which is beautifully expressive in its simplicity much like his beloved “Pilgrim’s Hymn.” This recording will appeal to many, as Paulus’ music is undeniably beautiful and pleasing; but it also important because it serves to introduce lesser known music, including a new masterwork, of an influential 21st century American voice.